Today begins a new summer series on Countermelody, celebrating mid-century music-making in New York City between the years 1950 and 1975. We begin with a celebration of Patricia Neway (1919-2012), one of the towering figures of the operatic – and Broadway – stages. Two of her greatest assumptions, in fact, took place on the Broadway stage: Magda Sorel in Gian Carlo Menotti’s opera The Consul, which premiered on Broadway in 1950, and the Mother Abbess in Rodgers and Hammerstein’s final stage music, The Sound of Music, for which Neway was awarded the 1960 Tony Award for Best Featured Actress in a Musical. Neway combined an unusual voice of startling, sometimes raw, power, with an acting ability rarely seen, especially on the operatic stage. Neway’s range easily encompassed contralto roles as well as dramatic soprano parts. This episode features audio excerpts from rare kinescopes of her performances of Poulenc’s Dialogues of the Carmelites as Menotti’s Maria Golovin, as well as her galvanizing portrayal of Magda Sorel from a 1960 film. She also displays her stunning musical versatility in music by Buxtehude, Barber, Gluck, and the late Carlisle Floyd, as well as settings by Israel Citkowitz, John Gruen, and Thomas de Hartmann of texts by James Joyce from a rare 1959 recording. In addition, I dispel forever the fake news, all pervasive claims to the contrary, that Patricia Neway and someone named Frances Breeze, an exact contemporary of Neway’s, are one and the same person. 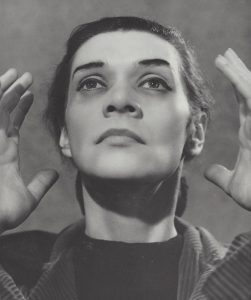