Today’s episode is a special request from one of my most dedicated listeners, and one with which I am happy to comply. It is already seven years this month since the death of the great Swedish tenor Nicolai Gedda (11 July 1925 – 8 January 2017). One of the most cultivated singers of the twentieth century, Gedda not only had a rock-solid technique and an instantly recognizable timbre, but he was a brilliant musician and a polyglot of the first order, singing a wide range of repertoire and styles in a host of languages. He was also a prolific recording artist. Though he sang an enormous range of operatic roles, in this episode, I have decided to focus entirely on a slightly lesser-known aspect of his career: his work in art song. Gedda was a master of French style, but also celebrated for his performances of Russian music. And one of the three languages he spoke while he was growing up was German, which lends his work in that language a real authenticity as well. In listening to recordings of song repertoire, I was struck by the frequent added spontaneity and commitment of his live versus his studio performances, so the episode features a large number of selections culled from Gedda’s live recitals. Gedda is accompanied by some of the most exceptional pianists of his time: Alexis Weissenberg, Wolfgang Sawallisch, Gerald Moore, Geoffrey Parsons, Dalton Baldwin, Erik Werba, Hermann Reutter, and his compatriot and most frequent collaborator Jan Eyron. Another extraordinary aspect of Gedda’s singing was his longevity. We hear him in songs by Strauss, Berlioz, Schubert, Janáček, Duparc, Grieg, Schumann, Fauré, Respighi, and Gounod, recorded over a period of nearly 40 years. Here is another singer who was active into the twilight of his life and sang into his seventies with both the intimacy and clarion power that were his musical trademarks. 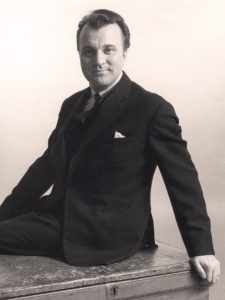 The Chinese-American bass Yi-Kwei Sze (1915-1994) was the first Chinese singer to achieve worldwide prominence in the world of Western classical music. From his first studies with Vladimir Shushlin at the Shanghai Conservatory, Sze’s sound and artistic soul carried on the great tradition of the Russian basses, including that of Alexander Kipnis, with whom he studied after emigrating to the United States in 1947. This episode captures Sze’s legacy in both his live and (comparatively rare) studio recordings, including operatic arias by Verdi, Mozart and Handel, and songs by Schubert, Schumann, Brahms, Mussorgsky, and Rachmaninov. Alongside my tribute to this great artist, I also consider the plight of the Asian musician as eloquently set forth in a riveting article published in The New York Times. Over the course of the past nearly two years since I have been producing the podcast, I consider Yi-Kwei Sze to be one of the greatest artistic discoveries on my own path. A note for my Patreon supporters: a second Yi-Kwei Sze episode is being published today that further explores his recorded legacy.