Something about this week’s episode has really gotten to me. I guess I’m just madly in love with the melodies of Francis Poulenc, and as a result, increasingly in love with the artistry of Pierre Bernac. These two formed an artistic partnership similar in intensity to that shared by Benjamin Britten and Peter Pears, except that in the case of the Gallic couple, this alliance did not include a romantic element. In spite of that, the pair achieved an artistic intimacy that is sometimes almost painfully honest. Maybe it’s that part of their story that so moves me: that two gay men, neither one sexually involved with the other, still achieved, on an altogether different plane, the deepest kind of intimacy. This episode features performances of the duo in melodies by Poulenc set to texts by Guillaume Apollinaire, Paul Éluard and Louise de Vilmorin, as well as songs by Chabrier, Debussy, Chausson, and Samuel Barber. We also hear Bernac performing Bach and Schumann in collaboration with Robert Casadesus, Charles Munch, and Roger Désormière; and Poulenc accompanying singers Denise Duval, Hugues Cuénod, Geneviève Touraine, and Bernard Kruysen in both live and studio recordings. The episode features extensive discussion, mostly from Bernac’s book on Poulenc and his songs, of Poulenc’s devotion to poetry and his very particular compositional method of getting to the heart of a poem. 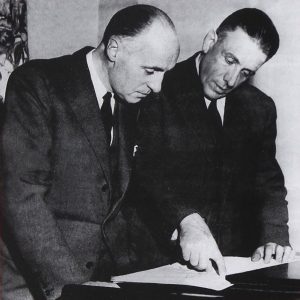