The world changed yesterday with the death of Queen Elizabeth II, whose subjects in the United Kingdom just this summer celebrated the 70th year of her reign. How do I, as a progressive (and non-British) person, neither a royalist nor an imperialist, commemorate her passing with the respect that she deserves? I found my answer, as I so often do in other of life’s conundrums, in the artistry of Janet Baker, who celebrated her 89th birthday on 17 August, and who, in her day was often known as “the English Rose.” There is something about Baker’s artistic personality: her nobility of utterance, her gravitas, her humanity, that made her a particularly striking interpreter of various queens in the operatic literature, from Alceste and Dido to Mary Stuart. And because, from the time of her Carnegie Hall debut in 1966 until her final appearance there in 1989, seven years after her official retirement from the operatic scene, she was a fixture of the New York concert scene, she also fits quite comfortably into the framework of this summer’s celebration of musical life in New York between the years 1950 and 1975. Her towering operatic performances of roles by Gluck, Donizetti, Berlioz, and Purcell, are balanced with her profoundly moving performances of music by Bach, Gurney, and Schubert. Queen Elizabeth II is further memorialized by an excerpt from the world premiere performance of Benjamin Britten’s Gloriana, composed for, and premiered six days after, her coronation in 1953. 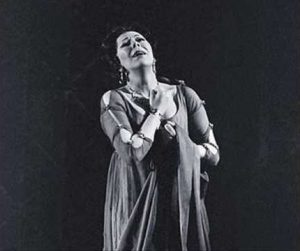