Hearing the voice of countertenor Russell Oberlin (1928 – 2016) as a soloist with the Robert Shaw Chorale was one of the formative experiences of my early life. I doubt that I would ever have become a countertenor myself had it not been for that beacon of a voice as my shining ideal and example. Many years after his early retirement from singing he extended kindness and generosity to me in a way that has always remained with me. Since I have begun the podcast and with rare exceptions, I generally shy away from discussing other countertenors. Today I break my silence on the topic to present to you the greatest countertenor of them all in all his uniqueness. From his early days as a founding member of the New York Pro Musica and his series of medieval and renaissance music, through his electrifying stage appearances as Oberon in Benjamin Britten’s A Midsummer Night’s Dream, through his standard-setting appearances in Handel and his unexpected but charming expertise as a singer of art song and reciter of poetry: all these aspects of Oberlin’s versatility and artistry are herein represented. A special vocal guest is the tenor Charles Bressler (1926 – 1996), like Oberon a founding member of the New York Pro Musica, who is heard in four duets with Oberlin. Perhaps Oberlin’s greatest achievement lies in the simplicity and nobility of his performances of the music of Henry Purcell, who is also well-represented here. This episode is a must for all lovers of great singing in general and specifically for all who want to hear what well-equalized, technically balanced and secure countertenor singing sounds like. 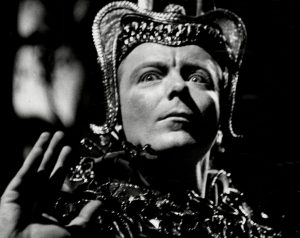