I return to Cathy Berberian, Prima Donna of the Avant Garde (or “The Divine Miss B” as she was sometimes called in the mid-seventies) for a further exploration of her career and influence on vocalism in the twentieth century and beyond. This time around I consider her explorations outside of the avant garde, specifically the recital. Based on her 1967 recording of Beatles Arias, the conductor Nikolaus Harnoncourt invited Cathy Berberian to take part in his groundbreaking 1969 period instrument recording of Monteverdi’s Orfeo. In 1969 Cathy Berberian began to perform recitals that exploited her entire stylistic and vocal range, a program which eventually became known as “From Monteverdi to The Beatles.” In 1971 her ex-husband Luciano Berio wrote a theater piece for her called Recital I (For Cathy), in which she portrayed an increasingly deranged performer who eventually descends into madness. Her interest in Reynaldo Hahn and Marcel Proust eventually led her to create a program entitled À la recherche de la musique perdue. Additional late-career recitals were called Cathy Berberian’s Second Hand Songs and Cathy Sings America. This episode features excerpts from all of those works, as well as a smattering of folk music and a recorded excerpt of her singing the title role of Carmen, a tantalizing prospect which never came to be. The episode also includes a tribute to Kathleen Ferrier, whose 109th birthday was observed this past week. 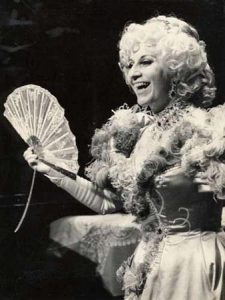