Today’s episode celebrates a pioneer in the performance of twentieth century vocal music in anticipation of her 96th birthday on Christmas Day. Bethany Beardslee was a titan who set standards in the performance of the music of Arnold Schoenberg and Milton Babbitt in particular, but who also acted as muse to a host of mid-twentieth century avant garde composers whose work she premiered and often recorded. But she was also a member of the pioneering early music ensemble New York Pro Musica in the late 1950s and was an innovator in programming daring and diverse recital repertoire which combined Lieder and melodies with the contemporary music for which she was best known. This episode samples her recordings over the course of more than thirty years, and includes composers such as John Dowland, Robert Schumann, Claude Debussy, Giovanni Battista Pergolesi, and Johannes Brahms alongside such twentieth century giants as Anton Webern, Ernst Krenek, Igor Stravinsky, Ben Weber, Mel Powell, Robert Helps, Fred Lerdahl, and Godfrey Winham, her second husband. Throughout the course of a career devoted to, to paraphrase the title of her autobiography, “singing the unsingable,” Bethany Beardslee combined rock solid-technique and silvery tone with peerless musicianship and interpretive acuity to set standards that have yet to be surpassed. Please join me in celebrating this great artist. 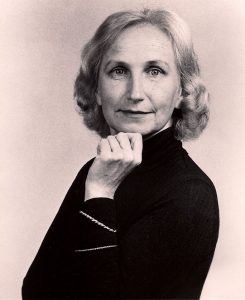