Greetings to all from my former home of Manhattan! Upon landing here a week ago, I was greeted by the news of the death of Ned Rorem, the man previously known as “America’s Greatest Living Composer,” who just last month had celebrated his 99th birthday. Though he won the Pulitzer Prize in Music in 1976 for his orchestral work Air Music, Rorem was most celebrated for his vocal music, in particular his art songs. In this episode, I will delve into that aspect of his output, from his earliest published work to his extraordinary late masterpiece Evidence of Things Not Seen. The episode features singers who collaborated closely with the composer, including Phyllis Curtin, Donald Gramm, Beverly Wolff, Regina Sarfaty, Phyllis Bryn-Julson, Kurt Ollmann, and others. Many other singers were also drawn to Rorem’s songs, including Leontyne Price, Jan DeGaetani, Martina Arroyo, and Laura Aikin, all of whom are represented here. As celebrated as a frank and forthright diarist and essayist as he was as a composer, Rorem (like his British counterpart Benjamin Britten) had extraordinary taste in the poetry and texts he chose to set. In this episode alone, we hear compositions set to words of Sylvia Plath, Paul Goodman, Walt Whitman, Paul Monette, Theodore Roethke, Frank O’Hara, and others. The episode concludes with a tribute to another musician who died earlier the same day, the American collaborative pianist David Triestram, who accompanies his dear colleague and friend Roberta Alexander in Leonard Bernstein’s poignant and timely song “Some Other Time.” 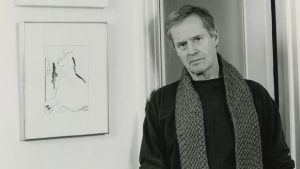