Today’s brain teaser: What do world-class singers Irmgard Seefried, Virginia Zeani, Piero Cappuccilli, birthday girl Gundula Janowitz, Galina Vishnevskaya, Giangiacomo Guelfi, Felicia Weathers, Elisabeth Grümmer, Wolfgang Windgassen, Pavel Lisitsian, and Arlene Saunders, have in common? If you need a hint, it’s in the title of today’s episode: each of them sang at least one and not more than ten performances at that venerable institution, the Metropolitan Opera. These and a number of other artists will be featured on this week’s episode, to be followed by more world-class artists who, for one reason or another (though certainly not talent, skill, or ability) “barely sang at the Met.” We hear music of Mozart, Strauss, Verdi, Stravinsky, Wagner, Puccini, and Weber, led by conductors who either were fixtures at the Met (Thomas Schippers, Nello Santi, Dimitri Mitropoulos), appeared occasionally at the Met (Leopold Ludwig, Charles Mackerras), or never appeared there (Wolfgang Sawallisch, Ferdinand Leitner, Joseph Keilberth) or appeared there only once (John Barbirolli, who led a single gala concert there in 1940).

Countermelody is a podcast devoted to the glory and the power of the human voice raised in song. Singer and vocal aficionado Daniel Gundlach explores great singers of the past and present focusing in particular on those who are less well-remembered today than they should be. Daniel’s lifetime in music as a professional countertenor, pianist, vocal coach, voice teacher, and journalist yields an exciting array of anecdotes, impressions, and “inside stories.” At Countermelody’s core is the celebration of great singers of all stripes, their instruments, and the connection they make to the words they sing. By clicking on the following link (https://linktr.ee/CountermelodyPodcast) you can find the dedicated Countermelody website which contains additional content including artist photos and episode setlists. The link will also take you to Countermelody’s Patreon page, where you can pledge your monthly support at whatever level you can afford. Bonus episodes available exclusively to Patreon supporters are currently available and further bonus cotent including interviews and livestreams is planned for the upcoming season. 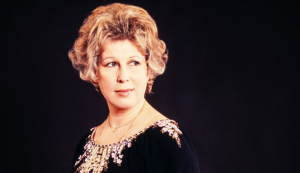