A year ago, as I was preparing my memorial Countermelody episode dedicated to Maria Ewing I was struck anew at just how naturally she had mastered the often messy “crossover” genre. Perhaps that’s because she never “crossed over” at all: this material formed part of her essence. I thought it would be a lovely thing to give a more complete picture of her work as a pop singer, using three primary sources: first, her 1990 studio pop album entitled “From this Moment On,” featuring arrangements by Richard Rodney Bennett; second, a rare release entitled “Simply Maria,” which comprises a live concert she gave at the Barbican Centre in London in 10 May 1997; and third, live and studio recordings that she made in in the early 2000s with the jazz combo Kymaera, led by guitarist Simon James. The range of material is dizzying, from Broadway classics by Rodgers and Hammerstein, Cole Porter, Jule Styne, Harold Arlen, Cy Coleman, Kurt Weill, and George and Ira Gershwin to jazz stylings by Tom Jobim, eden ahbez, and Billy Strayhorn, with more than a few surprises along the way, and her mastery of it all is exceptional, with all of the intense commitment she showed in her operatic portrayals (and none of the condescension or preciousness associated with certain other crossover artists). I’m so thrilled to share this less well-known side of one of the great operatic singing actors of our time. 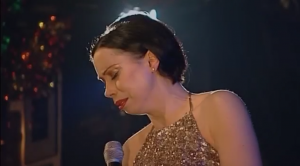