The exceptional, distinctive Maria Ewing died of cancer on January 9 at her home outside of her native Detroit at the age of 71. Even before her death, I had been planning an episode on Maria Ewing, who last fall received an enormous amount of press as the mother of actor and director Rebecca Hall, whose latest film, Passing, was hitting the screens in a big way. The film is about two light-skinned Black friends in the 1920s, one of whom makes the conscious decision to present as white. The implication in much of the press was that Maria Ewing had done the same and was being taken to task for having done so. In actuality, Maria Ewing spoke frequently about her father’s apparent African American roots, and never actively tried to hide her (at times murky) family history. But, I submit to you, this is not the real story. In this episode, the first of my Black History Month 2022 series, I attempt to present as full a musical portrait of the artist as possible, allowing listeners to experience the unique musical and dramatic genius (and I use the term advisedly) of this fascinating artist. Few singers can survive comparison with Maria Callas. Maria Ewing, for all her demonstrable flaws, was one of the few artists that merit such a comparison. In this episode we hear Ewing in a wide range of material, from Purcell’s Dido to Puccini’s Tosca, with a nod to her two most famous roles, Carmen and Salome; an emphasis on both her Mozart portrayals and a focus on her aplomb with French music; and a sampling of her flair for pop music and jazz. I also discuss her sometimes controversial vocalism and role assumptions which in turn led to her blanket dismissal by her detractors. But in the end, it is her fascinating combination of carnality and innocence which made her unique. I remain, as I always have been, a devoted member of Club Ewing. This is a long-overdue Countermelody tribute to a unique and irreplaceable singer. 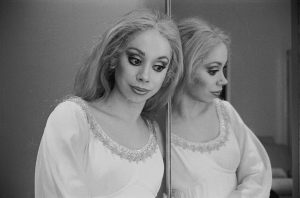