Earlier this year, in an episode entitled “Women of Color Sing Mahler,” I provided many of my listeners to their first exposure to the Mexican contralto Oralia Domínguez (25 October 1925 – 25 November 2013). Domínguez is famed for her collaborations with such musical giants as Maria Callas and Herbert von Karajan, but on her own terms, she ranks alongside those monumental true contraltos like Marian Anderson and Kathleen Ferrier. Though there is no question that she was underrecorded, she left a handful of classic commercial recordings, and a plethora of recorded live performances which an artist both technically grounded and fearless in expression, one whose legato singing exuded repose just as her phenomenal coloratura singing generates genuine excitement. I cannot say enough about this artist, who has rapidly become one of my very favorites! The episode features Domínguez in a wide range of material, from Monteverdi, Handel, and Vivaldi to the meat and potatoes roles in the standard operatic repertoire (Verdi, Rossini, Donizetti, Ponchielli, Saint-Saëns, Massenet) as well as less familiar fare by Michael Tippett and Mexican composers Silvestre Revueltas and Salvador Moreno. Along the way our Earth Goddess is joined by fellow singers Joan Sutherland, Martina Arroyo, Mirella Freni, József Simándy, Monica Sinclair, and, of course, Maria Callas. A bonus episode published concurrently on Patreon presents Domínguez in extended operatic scenes and further rare song material. 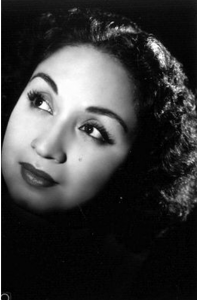