Denise Duval, whose 101st birthday we posthumously commemorate on October 23, will forever be associated with the music of Francis Poulenc, and specifically his operas, in which the lead soprano roles were either created by her, or were written with her in mind. This episode not only presents Duval in excerpts, in live concert and stage performances, of all three roles: Thérèse in Les Mamelles de Tirésias, Blanche de la Force in Les Dialogues des Carmélites, and the unnamed heroine in his searing 1959 monodrama La voix humaine, alongside her performance in the world premiere of her final creation for Poulenc: the brief 1961 monologue La Dame de Monte-Carlo. But Duval was a versatile singer whose many and varied roles may surprise you. I present her also in both French and Viennese operettas by Lehár, Kálmán, Planquette, Messager, and Hervé, as well as operatic roles by Ravel, Debussy, and Saint-Saëns, concert works by Florent Schmitt and Louis Durey, and, from a joint recital with Poulenc, a breathtaking excerpt from Debussy’s Proses lyriques. Duval’s unusual voice and artistic profile defy classification, but this episode seeks to present as full a portrait as possible of this great singer and actor. Heard alongside Duval are tenors Jean Giraudeau, Alain Vanzo, Michel Hamel, and Jean Pomarez; baritones Jacques Jansen, Robert Massard, and Hans Wilbrink; and in an amusing turn, Francis Poulenc himself. 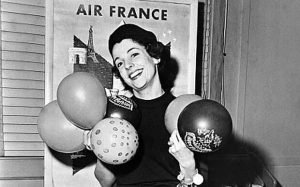