This week’s episode celebrates Halloween while at the same time initiating my new ongoing series on Twentieth Century Opera. From Dvořák’s Rusalka, premiered in Prague in 1901, through Corigliano’s The Ghosts of Versailles, premiered in New York in 1991, there is a wealth of operatic material, some barely remembered today, that touches upon various aspects of the occult, be that witches, devils, exorcisms, demonic possessions, or those that conjure the dead. Alongside the aforementioned works, this episode also features work by Benjamin Britten, Gian Carlo Menotti, Igor Stravinsky, Ferruccio Busoni, Franz Schreker, Serge Prokofiev, Ottorino Respighi, and Krzysztof Penderecki, performed by Teresa Stratas. Tatiana Troyanos, George Shirley, Anna Moffo, Mack Harrell, Maralin Niska, Gwendolyn Killebrew, Jane Rhodes, and others in performances recorded between 1949 and… nearly yesterday. Some of it is folksy, some humorous, some creepy, some horrific, but it is peopled by characters that either haunt or are haunted. 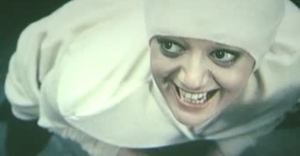