The follow-up episode to my previous Forgotten Broadway episode is an epic one, chock full of fascinating composers, lyricists, performers and shows. We begin with a tribute to birthday boy Leonard Bernstein, a song from Peter Pan sung by gay Broadway icon Larry Kert. From there we encounter shows by Lerner and Loewe, Rodgers and Hammerstein, Kander and Ebb, Cy Coleman, Dorothy Fields, Strouse and Adams, Jerry Herman, Stephen Sondheim, Schmidt and Jones, Vernon Duke, Mary Rodgers, Sigmund Romberg, Harold Rome and Leroy Anderson, among others, performed by Jane Powell, Pat Suzuki, Melba Moore, Rita Gardner, Jack Cassidy, Rebecca Luker, Cesare Siepi, Susan Johnson, Dody Goodman, Pearl Bailey, Ezio Pinza, Elaine Stritch, Shannon Bolin, and others. Diverse topics discussed include the Broadway revue, queer subjects and performers, and the place of performers of color on Broadway. This is a long episode that I recommend listening to in segments! And please be aware that an equally mammoth third segment on Forgotten Broadway will be published this weekend for my Patreon supporters! 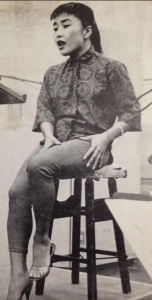 Today I feature as part of my summer series on Great Baritones, one of the greatest Broadway baritones of all time, John Raitt (1917-2005). Wait: did I say one of the greatest? Make that possibly the greatest! Along with Alfred Drake and a handful of others, John Raitt completely redefined the Broadway leading man: strapping, robust, virile, handsome, with an operatic caliber voice and splendid acting chops to match. His creation of the role of Billy Bigelow in Rodgers and Hammerstein’s magnum opus, Carousel, turned a deeply problematic character into a sympathetic one. In this episode we hear excerpts from this role, as well as some of Raitt’s other hits (and non-hits), both on—and away from—Broadway: The Pajama Game, Oklahoma!, Annie Get Your Gun, Three Wishes for Jamie, Show Boat, and others, as well as a bit of opera! I also feature tracks from four of his solo records, recorded and released between 1955 and 1970, which include Neopolitan songs, folk songs, and pure late 60s pop as well as Broadway standards not normally associated with him. Some of his duet partners include Barbara Cook, Rosemary Clooney, Florence Henderson, Doretta Morrow, Anne Jeffreys, as well as his daughter Bonnie, herself one of the great blues singers and guitarists of the late 20th century. We also hear Bonnie’s deeply personal song “Circle Dance,” which concerns their sometimes fraught—but eventually fully reconciled—relationship. Was he really a baritone, was he a tenor masquerading as a baritone, or was he a true “baritenor”? I consider all these possibilities but leave it to my listeners to draw their own conclusions. No matter how you assess John Raitt’s voice, in the end, it sustained him through a career that lasted seven decades; it is a thrill to present him to my listeners in his full baritenorial splendor.