This week I present an important African American artist who has been nearly forgotten by history: the bass-baritone Jules Bledsoe (1897-1943). He is most remembered for creating the role of Joe in Jerome Kern and Oscar Hammerstein II’s Show Boat, but he was equally celebrated in his time for his memorable concerts, which took place both here and in Europe, and for his operatic portrayals, most significantly, the title role in Louis Gruenberg’s opera The Emperor Jones, based on the play by Eugene O’Neill, which he portrayed both in the United States and in Europe. When this opera premiered at the Metropolitan Opera in 1933, the legendary baritone Lawrence Tibbett created the title role (in blackface). Barred from singing at the Met because of his race, Bledsoe took his portrayal of Brutus Jones on the road, performing it in a triumphant European tour, but also subsequently in New York in 1934 under the aegis of the short-lived Aeolian Opera Company, which was intended to provide performing opportunities for Black opera singers, but which folded almost immediately. Jules Bledsoe was also a composer who wrote many songs and arrangements of spirituals, as well as a version of Uncle Tom’s Cabin entitled Bondage, as well as his own operatic setting of O’Neill’s Emperor Jones, which may or may not have been performed at the time. Even less well-known and acknowledged is that Jules Bledsoe was a gay man in a relationship with a Dutch white man named Freddy Huygens who at the time of Bledsoe’s premature death was referred to as either his “manager” or his “closest friend.” I present examples of all the extant recorded material I could find by Jules Bledsoe, alongside recorded examples of work by his collaborators Abbie Mitchell, Irene Dunne, Anne Roselle, Marie Powers, Todd Duncan and excerpts from the work of composers W. Franke Harling, Shirley Graham Du Bois, and Louis Gruenberg performed by Jeanette MacDonald, Valaida Snow, Nicola Rossi-Lemeni, and Lawrence Tibbett. Billie Holiday even puts in a special appearance! The episode also includes tributes to the recently departed British soprano Joan Carlyle and the US-American bass-baritone Jake Gardner. 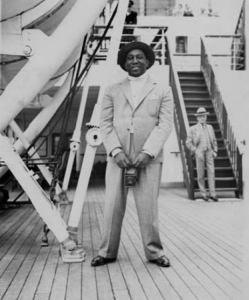 Today I present to you two Black baritones who made their mark in Europe and the United States over the course of several decades. Leslie Scott (ca. 1920-1969), who appeared on the State Department-sponsored tour of Porgy and Bess in the 1950s, and who played Jake in the now-obscure 1959 film version of the piece, began his career as a big-band singer. About his fellow singer, bass-baritone Owen Williams, I have been unable to discover much of anything, in spite of the fact that, like his compatriot Kenneth Spencer, he was featured in German film and television in the 1950s and 1960s and also recorded extensively in the 1960s, in his case, for Philips Records. Both Williams and Scott display undeniable vocal and interpretive gifts that are sometimes obscured by other factors, such as the tackiness of the arrangements and the pervasive and unchecked plantation nostalgia of the period, especially in Germany. Close examination of the recorded legacies of both Williams and Scott provides a partial glimpse into their lives and careers, even if too much of it today remains hidden in obscurity.

The world is in chaos. We don’t know from one day to the next, or one hour to the next, what is going to happen. I am currently halfway around the world from home and wondering what the coming weeks will bring. This week I have decided to feature music that addresses reaching out to loved ones across enormous gaps of time and space, the yearning for a home lost and the ambivalence with which we face the changing seasons. But all is not hopelessness: at the end of the episode, I offer several pop songs by some of my favorite singers that address the promise of healing and reunion, no matter how difficult the process. In this episode, marking the six-month anniversary of Countermelody, I’m featuring Lorraine Hunt Lieberson, Hina Spani, Rosa Ponselle, Meta Seinemeyer, Anne Roselle, Claudia Muzio, Eidé Noréna, Eileen Farrell, Kathleen Ferrier, Martha Flowers, Janis Ian, Chi Coltrane, and Dusty Springfield. I also offer a recording I made in 2006 of “Danny Boy,” and I explain the song’s significance to me.